Why say a well is like a piece of gold?

A piece of gold. Really? 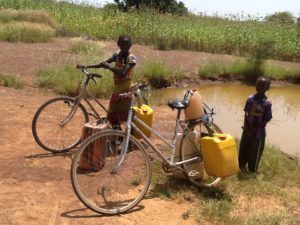 Mansila is a large village. Really, it is a small town with about 12,000 people living there. There was just one proper well there which was not enough. So people used the dirty water from the river as drinking water and this resulted in disease. We don’t have pictures from the town, but this is what it is like in other parts of Burkina Faso.

It is now the dry season and the river does not have so much water in it. With less water in it, that water will be even more dirty.

It was easy to make a decision

We decided to try to place a well there. News of this started to spread around the town. One day, Christine received a phone call from a man who introduced himself as Mr Diallo. This a very common name amongst the Fulani people and Christine thought it might be someone that Boureima knew. His name is also Diallo. But it was the mayor of Mansila calling her. And he said “A well is like a piece of gold!” This is a measure of how grateful they were.

The need there was great. There is a pastor called Moussa working there who has done much good for a number of years. He is known as a man of prayer and has helped many people with health problems through prayer. Some people wanted to kill him, but the chief Imam of the area stopped them and said that Christians are good people.

So in November, Myra’s Wells sent a drilling team to the area. It is in the far east side of the country and it can be difficult to find water there. Unfortunately, the borehole was dry. This was a huge disappointment to us and the people living in the town. 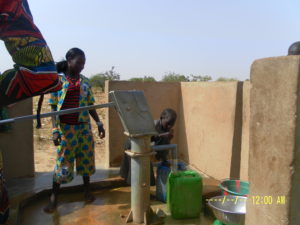 But we decided to try again. Where there is a need, we like to pray about it and try again. And we are delighted to say that this time, the drilling was successful. It was during the first week of January. The team returned to Mansila and found water. The people there now have their piece of gold. We thank God for His provision. It means so much to the people at Mansila. This is now well number 105 on our list of wells.

We will post pictures of the new pump when we have them. But it will look like this one. We will be praying that it will produce clean water for many years.

Myra’s Wells promises that all donations received will be used only to provide clean water in Burkina Faso. We do not use any of the donations for any other expenses. The trustees personally pay for all other expenses, including administration, travelling and publicity. If you would like to help us to provide a piece of gold to other villages, click here to see our How to Donate page.