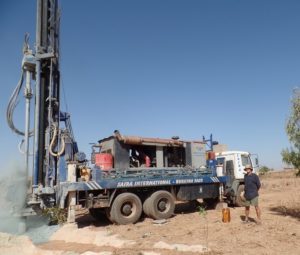 Well, well! What a year! As we continued to drill wells, by the grace of God, we have been able to give clean water in 2017 to many more people in Burkina Faso . Perhaps as many as 50,000 people. It has been a tremendous year with donations being received from so many generous supporters. Thank you to each one of you, from each of the 50,000 people. 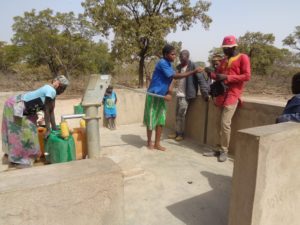 At the end of 2016, there were 80 wells on our list of wells. We ended 2016 with a well completed near Kaya and that meant we had built 11 wells that year. At the end of December 2017, the number on list stands at 104. Click here for the full list. We have completed 24 wells during the calendar year. This reflects the goodness of God and the generosity of people who have supported us over the last 12 months.

All the wells bring us, and the people of Burkina Faso, much joy. But some are particularly memorable.

The first one of 2017 was in the outskirts of Ouagadougou. The news of this one arrived just after there had been disappointment at another one in the morning. 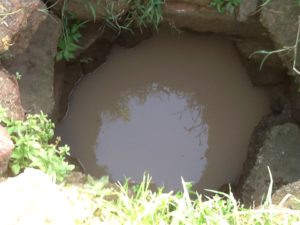 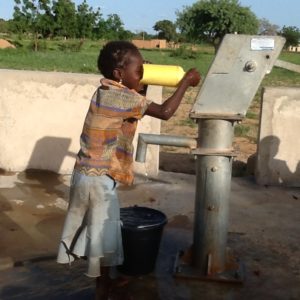 Then there was Noatenga. There had been disappointment at Sigra Bila the previous day. The drilling team had struggled to reach the village because of the state of the roads in the rainy season. But they were not able to find water. Then, on the way back, they went to Noatenga and replaced the horrible open well which was there with a lovely new one. Click here for more details.

By the end of June, when the rains had made roads impassable for the drilling teams, we had drilled 7 wells. Over the next few months, we received many generous donations. 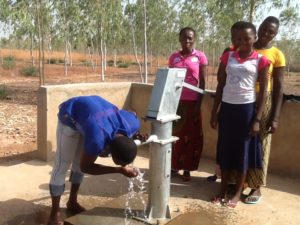 Drilling started again in October. Christine organised surveyors and drilling teams and we began work in earnest. The second week of October resulted in 5 more wells. The next week, there were another 4. It was becoming difficult to keep up with the admin around them. One in the north of the country saw a flow rate of 7000 litres per hour, 10 times the acceptable minimum. Click here for more details. Another one produced 9000 litres per hour. 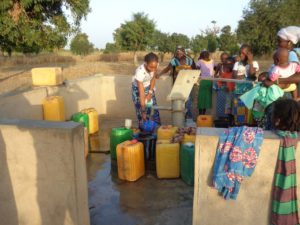 In October, we had a phone call from a pastor in Burkina. The chief of a village had just travelled 60 km to ask about having a well in his village. There was a huge shortage of water in the village and he had heard about Myra’s Wells. Our volunteers in Burkina Faso went to see the village and told us what it was like there. We agreed they needed a new well. The chief also asked the pastor to start a church there. He will be doing that shortly.

Drilling continued apace, even on Christmas Day! On Boxing Day, we heard that the Christmas Day drilling was successful. This was in a place where the surveyor had not been very confident about finding water. And that brought the number in the year to 24. Click here for more details.

And a water tower … 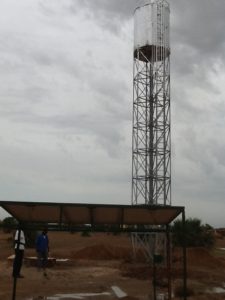 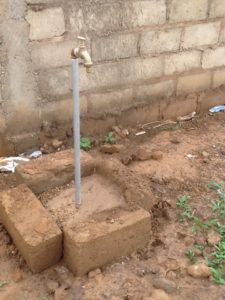 In addition to the 24 wells, we received funds, separately from the funds given for wells, to place a water tower next to a school. We drilled the well there in September 2016. But villagers using the well were disturbing the school. The water supply was good and so we erected the water tower. The solar powered pump keeps the 10,000 litre tank full. There is now a tap in the village. Click here for more details.

And a container has been sent to Ouagadougou. 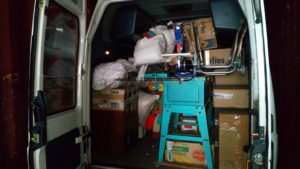 We sent another container in November and we expect it to arrive in Ouagadougou any day now. This is the sixth one that we have sent in the past few years. There are two minibuses and large amounts of equipment in it. Once again, we received funds, completely separately from the wells funds, to send this.

We have plans for further wells in 2018. We will soon be discussing with Christine where the next batch of wells will be. This may be as many as 10 more wells which we will try to finish before the rain starts in June. Our aim now is to have the first drilling season (October to May/early June), in Myra’s Wells history, when we have completed over 20 wells in the season. There are 17 so far. And with each well drilled, we pray that the recipients of the wells will also find the Living Water of which Jesus spoke.

100% of donations are used towards building wells. Other projects are funded separately and all other expenses are funded personally by trustees. To help us with this work, please see this link.