Your train journey may have brought clean water to Yerganga

This is the chief at the village of Yerganga in Burkina Faso. If you travelled on Cross Country trains between October 2016 and March 2017, you may have helped to bring clean water to Yerganga. This is how. 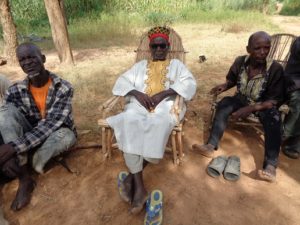 Eddie Martin, founder of Myra’s Wells, worked for Cross Country Trains – he has just retired! Senior managers at Cross Country knew about Myra’s Wells and the tragedy that led to its foundation. One, in particular – Andrew Marsh – was very kind to Eddie when the news of Myra’s fatal accident was given to him in September 2005. In the course of conversation, it transpired that, like Eddie, Andrew is a committed Christian.

10 years later and Eddie decided he really should think about retiring! Andrew had an idea and he talked to the Marketing, Catering and HR divisions and they kindly offered to try to raise funds to pay for a well in Burkina Faso. This is what was agreed by the Cross Country management:

5p per bottle of water goes to Myra’s Wells

The offer was very good. For every bottle of water sold on Cross Country Trains, between October 2016 and March 2017, they would donate 5p to Myra’s Wells. And so it was that, in August, Andrew came to Eddie’s 70th birthday celebration with a cheque for £4644. So if you bought a bottle of water on a Cross Country train during that period, you have contributed towards a new well. 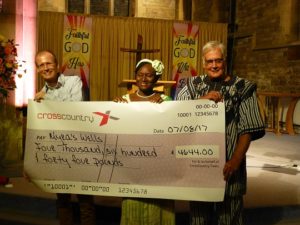 We decided that this village was in desperate need. Before we agree to drill a well, we ask for an application form to be completed. The form for Yerganga told us that this is large village. Perhaps 3000 people, not to mention 10,000 livestock. The livestock are their livelihood. But the nearest source of water was a lake. It is full after the rainy season, but dries up around January. And, anyway, it is dirty water. The nearest proper well with clean water in it was 7km away. 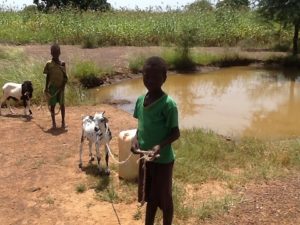 As a consequence, the people have health problems. The form says “Dirty clothes, bad smelling, often get stomach ache and diarrhoea”.

So it was an easy decision to make that we should provide a new well there. 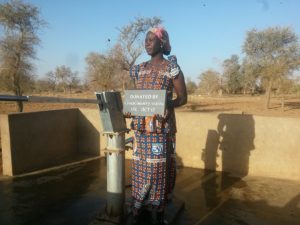 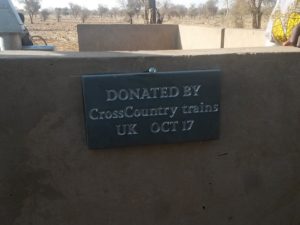 It is an excellent well. Water was found at 56 metres and the supply is 9000 litres/hour. This is one of the best boreholes we have had. Christine described it as a “barrage”. We look at that word and understand a “torrent”. In French (the official language in Burkina Faso) it is “dam”. Either way, it describes what this supply is like. This is well number 98 on our list of wells – click here to see the full list.

The people have a well in the village. They can drink and cook using clean water without having to walk 7km. There is plenty for crops and livestock. The cattle will be better nourished and they will fetch better prices in the markets. The train that left platform 3 in Bournemouth has helped to bring clean water to Yerganga. And it has helped to bring better health, living conditions and prospects.

On 11th February, people from the church in Ouagadougou travelled to Yerganga for the well blessing service. They explained to the village that the Myra’s Wells trustees want to show them the love of God. And they were able to explain the message of the gospel in a clear way too.

There are many more villages in Burkina Faso in very similar circumstances. We are a Christian charity and we pass all gifts directly to wells projects in Burkina Faso. If you would like to help us, please read our How to Donate page using this link.