It is hard to believe in this day and age. What would life be like if your nearest water was 8km away? Yet for the people at Toeg Yamba in Burkina Faso, this used to be the daily reality. Young children spent their time taking the donkey cart to fetch water, going 8km each way. And when they arrived back, they just had dirty water from the open well that was there. 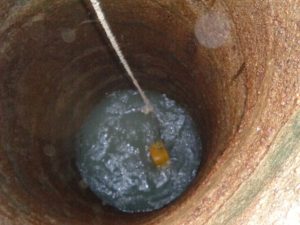 It didn’t take more than a few seconds to decide that the village needed a well! 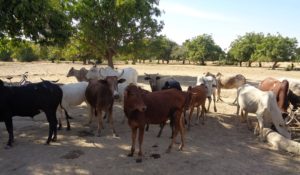 It wasn’t just the people. There are cattle at the village and the water for them had to be brought from the same open well too. Cattle are so important in the village economy. Often, this is just about the only means of earning some money. Without water, their livelihoods are threatened.

So, at the end of last year, we asked Christine to arrange the survey there. She sent one of the two trusted surveyors who we often use. He marked a place on the ground where he thought we should drill. With so many other wells in progress, it was the end of February before the drilling team were able to go there. They worked all afternoon and the following morning, drilling down to 81 metres, but there was no water.

Myra’s Wells will always try twice, if not three times!

About four weeks later, the surveyor returned and the drilling team went with him. He found another place that looked a likely candidate and this time, there was good news. The drillers found water at only 56 metres. It is amazing how often it happens that a second borehole, even quite close to a failed borehole, will produce water. The flow rate was good – 2500 litres/hour. We added Toeg Yamba to the wells list – number 111. The full list can be seen by clicking this link. 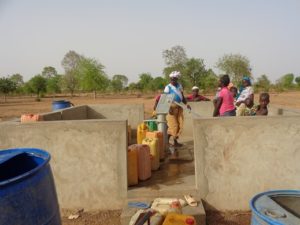 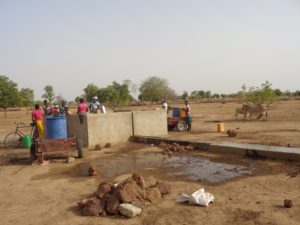 You can imagine how happy we were to hear the news! If we had favourite wells, this would be at the top of the list. Imagine how happy the people at the village must be. Their nearest water was 8km away. Now it is on their doorsteps. They still have to go to the pump with their containers, but it is only at the edge of the village now. 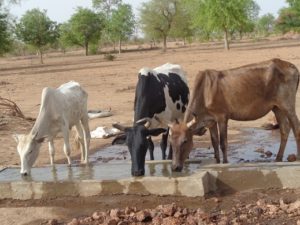 This is only a start though.

The children still won’t be able to go to school. The nearest one is 10km away. But now there is a proper supply of water, perhaps the local authorities will be able to provide a school there in the village. The population is around 4000 people, which includes many children. The nearest medical assistance is also 10km away!

How blessed we are in the UK (and other places)

If you would like to help us to provide water for more people in similar circumstances, please take a look at our “How to Donate” page. Our promise is that 100% of donations are used in well projects because trustees finance all other expenses.