Water for the people

Debere is on the way from Ouagadougou to Kaya in Burkina Faso. The village is spread out over a large area. As is normal, it consists of small groups of houses, maybe four, five or six in each group. These groups are all set about 50 to 80 metres from each other. The people had to walk up to 3 km to fetch water. And they had to cross the main road from Ouagadougou to Kaya. This was a hazard, particularly for the children. So we wanted to provide water for the people here.

In November 2017, Myra’s Wells asked the drilling team to go there to try for water. The first attempt was negative. There is still a small mound of dust left at the spot where the drilling took place. But the surveyor identified another spot where he thought there might be water. The drilling got down to a depth of 73 metres and there was, indeed, water. At 750 litres per hour, the flow rate is not huge, but it is certainly enough. This well is now number 99 on the full list of wells.

After the usual water testing the builders went back. They built the concrete base and surrounding wall. Then they fitted the pump. Some people in the village will still have to come 1 km to fetch the water. As the village is so spread out, there is no way round this – unless we are able to put another pump there sometime in the future. But they no longer have to cross the main road!

Water for the people – for drinking, but what else? 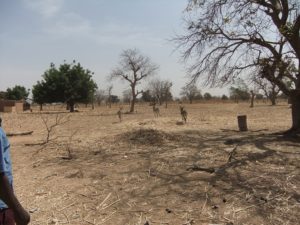 We were fortunate enough to be able to visit this village in January 2018. The land there is dry. There was not enough rain this year and crops have failed. The livestock looked thin and emaciated. With the help of the well and pump, they will be able to water their crops next year. That will help to feed the people. But it will also help to feed the livestock. Livestock is one of their ways of earning a living. They take animals to a market 20 km away to sell. If the animals are properly fed, they will get better prices. 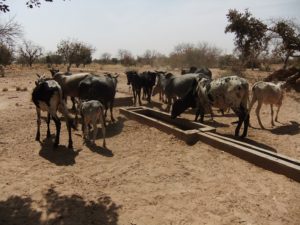 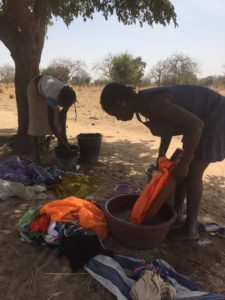 And, of course, the livestock can drink from the drinking trough at the well. We were just about to leave when some cattle came walking towards the well. There was nobody with them. Even though the well had been there less than 2 months, they knew the way to come. There is a short video of this on our YouTube channel – click here to watch it. By the time they had all arrived, there were about 30 of them. One of the boys pumped away to make sure that they had enough to drink. 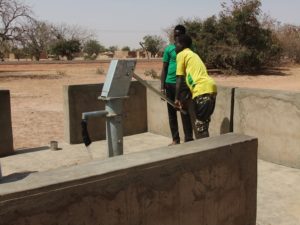 Also … there is now water for the people to wash themselves and their clothes.

We posted a story about the drilling of this well last in December 2017. Click here to read that story.

There are a number of other villages along this road in the same area. We already have requests from some of them for wells. Their need is as great as the need was at Debere. If you would like to help us to help them, you can find details on our How to Donate page. We promise that every penny donated will go to well projects as the trustees personally fund all other expenses.