Some of Myra’s Wells‘ supporters are experienced drilling engineers and consultants. But not everyone is. So, this is an article to give an outline of how we drill wells for the people of Burkina Faso.

Before we can start drilling, we have to know where to drill! That involves a selection process to identify the most needy places. As we write, we have application forms from more than 100 villages asking for a well to be drilled. As our funds are limited, we have to choose which ones we should do first. There is more about this process in a previous story which you can read using this link.

Then there has to be a survey done at the site. Again, there is a previous story about this – it is available on this link. 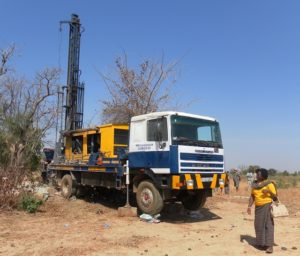 We use two or three different drilling contractors. They are all based in Ouagadougou and they all employ local people. Christine makes the arrangements and a drilling team sets off to go to the village. Usually, the surveyor will go with them to supervise. A drilling team consists of an experienced qualified head driller, together with labourers. The head driller has had to pass exams to gain the qualifications.

The drill arrives on site mounted on the back of a lorry. There is also a compressor which arrives on another truck – this provides the power for the drill. When you see the size and weight of the equipment, it is hardly surprising that we are unable to drill in the rainy season. 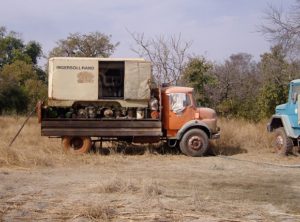 The rain doesn’t prevent drilling – but it does prevent the lorries from getting to the villages. The “roads” into the villages are no more than dirt tracks with potholes in them. When it rains, they just become mud and lorries of this weight would just get stuck. 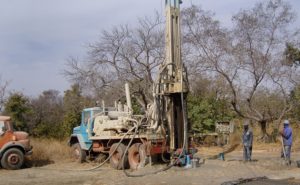 Once in the village, the drill is set up. The surveyor will have already marked the spot on the ground where the team should drill. So, drilling commences. The progress is usually about 10 metres every hour. And as the borehole progresses, the different strata in the rock are shown by the colours of the dust that comes up. Samples are laid out in neat little piles. The engineer adds more piping onto the drill as the depth of the borehole increases. 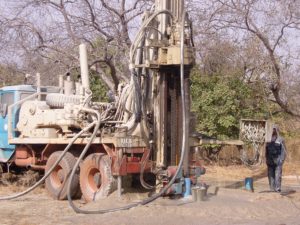 Usually, a large crowd will gather to watch the drilling. There is an air of anticipation – they are eager to know if the borehole will be successful. In perhaps between 70% to 80% of boreholes there is success. When the drill strikes water see what happens on this short video clip. Sometimes it takes two attempts in different locations in the village. Sometimes three. In just one case, it was the fourth attempt. Sadly, in about 1 in 15 villages, no water is found. 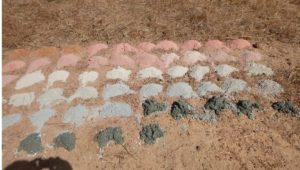 But is there enough water? 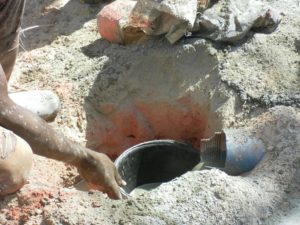 When there is water, it is a joyful thing! But we need to be sure that the borehole is sustainable. There is no point in buying a pump and fitting it, only to discover that the borehole dries up. So, the flow rate is measured. Water from the borehole is collected in a bucket and someone times how long it takes to fill the bucket. From that, the engineer works out what the flow rate is in litres per hour. If it is more than 700, the well is sustainable. Usually, it is much more. But sadly, there are times when it is not enough and the borehole has to be filled in. 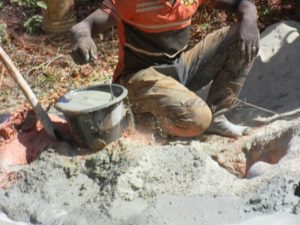 The water has to be tested for purity. So, the borehole is capped. If the water is pure, another team will arrive on site a few days later to fit a pump and build a surrounding wall. More about that in another article soon.