Kourkour is a village towards the south west of Burkina Faso. About 1800 people live there. Christine told us “This village needs water”. There was only a broken well there which had never provided enough water for all the people.

So with only a broken well, where did the people get their water?

There was a large open well in the middle of the village. This is a small open well in another village – the one at Kourkour is much larger and was providing enough water for most of the year, even if it wasn’t very clean.

But a tragedy happened. A little girl fell in and drowned. This is by no means the first time we have heard this story. With no other source of water within a realistic distance, the people had to continue to use the water. In fact, there are four more small villages close to Kourkour and the people at these villages had to use this open well too.

The village is fortunate enough to have a school. The children at the school had to use the open well too. It is about 500 metres from the school.

So we decided that the situation at Kourkour justified the cost of drilling a well there. The drilling team arrived on 2nd April 2018. We feel blessed by God to have found water at the first attempt. The drillers went down to 62 metres and the water flow is 1800 litres/hour. By the end of the day, the pipe had been capped so the water could be tested in Ouagadougou. A few days later, the water was pronounced clean and pure for drinking. The builders fitted the pump and built the surrounding wall. This is now well number 107 on the list of wells – click here to see the whole list.

And we recently received photos of the new well. 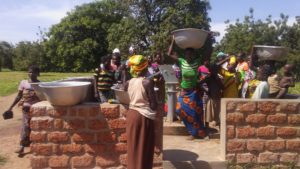 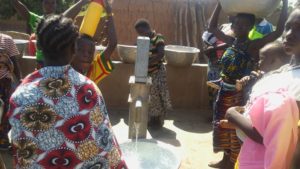 It is nice to see the metal bowls being used to take the water home and the people (mainly the ladies!) carrying the heavy bowls on their heads. In many villages, plastic containers are used. 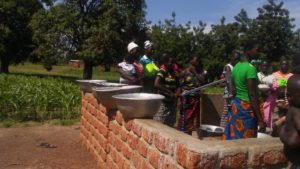 And the water from the open well can still be used for the crops which are now growing well in the rainy season.

But will even this well be enough?

It is difficult for us to imagine. 1800 people will be sharing this one well! It is highly likely that having a working pump will be a reason for more people to move into the area and build their small huts. If that happens, we may find that we have another request for another well in a different part of Kourkour.

And there are many, many other villages in the same state as Kourkour. We have a pile of application forms from villages where someone we know has told us “This village needs water”. In fact, there are over 40 in the pile at the moment and we have given the “go-ahead” on 12 of them. But it won’t be long before we have other people saying “This village needs water”! We will continue to use any donations we receive 100% for drilling wells and trustees will continue to pay administrative and all other costs ourselves.