Who went to Burking Faso in January?

This year, Eddie and Karen both went to Burkina Faso in January for about 2½ weeks. John, another of Myra’s Wells trustees, also went. And for the first week, Lois, Eddie’s daughter – also a trustee, joined them along with her eldest son Alfie (9 years old). 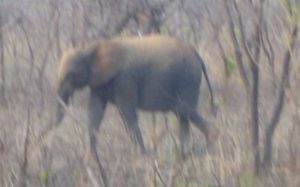 During the week that Lois and Alfie were there, they spent 2 days at one of the animal parks. Animals were somewhat elusive, but they did manage to take a few photos.

Seeing a borehole being drilled. 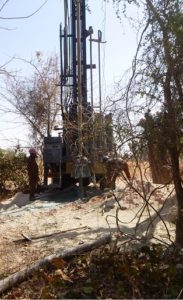 They wanted to see a well drilled. We had details of another one of the townships on the outskirts of Ouagadougou and Christine arranged for a drilling to take place. Unfortunately, drilling was unsuccessful at this first attempt. The borehole did not produce enough water. But, happily, the next day, the drilling team tried again and this time they found water. 2000 litres/hour at 64 metres deep. We give God thanks for this. 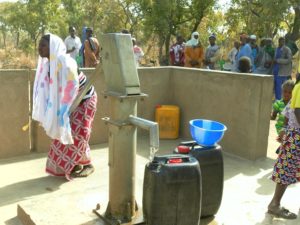 Visit to the south west. 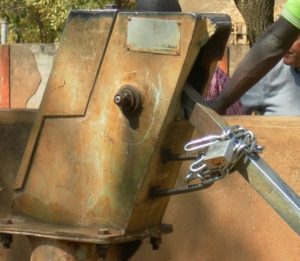 Eddie, Karen and John spent 5 days in the southwest quarter. They saw some of the places where wells have been requested. Some of what they saw was heartbreaking. One place in particular is called Ouadardou. These photos show the conditions there. There was a well there – but it is only for the school teachers and children at the school. The rest of the people had to go this dirty lake for their water. They used to go to a river, but it had dried up – that always happened about 3 months after the rainy season stops. 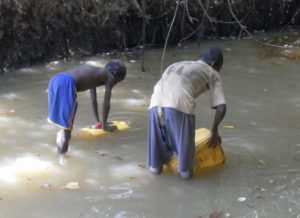 But there has been a change! There is now a lovely new well there. As soon as they arrived back, we decided that we had to drill a well for them. The drilling team found water at 56 metres deep and provides 1000 lires/per hour. We don’t have photos of it yet. But when they come, they will take pride of place on the mantelpiece (if you can remember what this is!).

They visited a number of other places. One of these is a gold mine. Another of our trustees, Sonja, had come across this place when she saw a video on YouTube. The conditions here are horrible. This is not an organised mining operation! People just dig holes in the ground. These can be 10 or 15 metres deep. They are not properly shored up and can collapse with no warning. Young men are quite often buried alive. And the amount of gold they find is tiny. They had no clean water in the area. Until now! Again, when Eddie and company arrived back, we arranged for drilling to take place. This was also successful. The new well gives 1200 litres/hour and is 54 metres deep.

Visits to many other places.

They saw many other places. And since they have come home, there have been another 9 wells drilled. One is a place where the people had a choice between walking 2 km and waiting for 3 hours to be able to use the pump – or going to a river (which, in any case, dried up 3 months after the rainy season finished). Now there is clean water right where they need.

Going to Burkina Faso in January 2020?

Please pray about this. The security situation is now much worse that it was. Please the article on this link about this and keep praying!