This is the latest information from the Foriegn and Commonwealth Office web site. 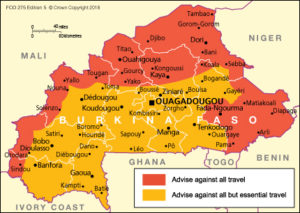 The Foreign and Commonwealth Office (FCO) advise against all travel to the following parts of Burkina Faso: all areas of the country north of the town of Boulsa; areas within 40km of the western border with Mali and 40km within of the eastern border with Niger; the south-eastern provinces of Gourma, Kompienga, and Tapoa (including the W National Park and the Arly National Park and their contiguous reserves and hunting areas).

The FCO advise against all but essential travel to the rest of Burkina Faso, including the capital Ouagadougou.

Terrorists are very likely to try to carry out attacks in Burkina Faso, including Ouagadougou.

And this is the text of a message we received today.

It is from a good friend seeking to spread the Gospel message to his own people.

“However we are really saddened, at the start of this New Year by continued terrorist attacks in Burkina Faso that caused a number of deaths in the military. Yesterday terrorists slaughtered several people in a northern village where a trainee Church planter comes from, again yesterday radio stations reported that terrorists slaughtered several members of a traditional chief’s family members including the chief. Adding to more sadness the villages mobilised themselves and attacked a nearby Fulani village causing many dead, for they assumed the attackers came from that village. The goverment has now decreed a State of Emergency in seven out of the thirteen regions of Burkina Faso. There is widespread fear and suspicion in people.

We would like to invite you to please pray for God to protect Burkina Faso and deliver Burkina Faso from the terrorists so that the country does not get taken over by them. Pray with us for real peace and reconciliation.

Please pray also for our neighbouring country Mali where 37 people were killed yesterday following fight between Fulani and another people group.

Please pray with us from Nehemiah 1.”