It is good to hear how wells continue to bring blessing.

In January 2016, Myra’s Wells drilled a well at a village called Komki. One year on, in their recent visit to Burkina Faso, Eddie and Karen visited this village to see if the well is still working properly. It is – and is being fully utilised. Clean water is being pumped for drinking and cooking. But it also means that the gardeners can now grow their produce all year round, not just for the three or four month that used to be the case.

This is what Karen has written in her diary:

“We make our way to our next destination, Komki Ipala, one of the three ‘Moira’s Wells’.  Moira was a friend of Myra after whom the charity of ‘Myra’s Wells’ was named.  Moira’s family and friends have provided these wells in her memory. They show great interest in the charity and their support has proved invaluable. 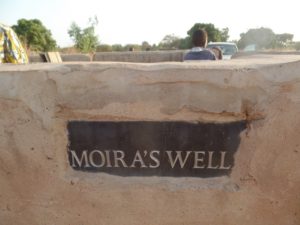 Komki Impala is a large, gardening village.  This area is full of green gardens that supply food to a wide area and provide a means of income to the whole village.  The well is situated in a reasonably central position. A year ago, the first drilling was negative, some water appeared but the flow was not sustainable.  The second attempt, more to the side of the village, gave a strong flow of clear water.  When we arrived this year, the well was crowded with the usual plastic jerry cans. The constant stream of villagers, to and fro, did not slow all the time we were there.  Children gathered to see the strange white people and stared at us.

And the result one year on .. 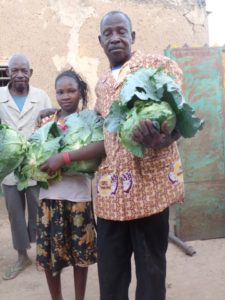 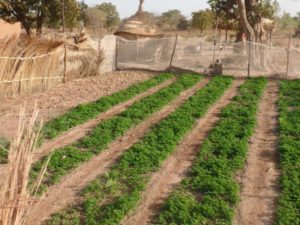 One year on, the gardens were everywhere and they were all flourishing.  Cabbages everywhere. Vegetables of all descriptions and fruits as well, it is good to see the small green fields.  There are no weeds and the rows are neat and straight. It is hard work in the heat as constant watering is necessary.  The women gather water at the well all day in this fight against the sun.  Michel told us that you only see women at the well in the day time and then the men take over and there are only men at the well during the night.  Moira’s Well never stops working but it has revitalised this village. Before the open wells were everywhere but they dried up and could only be used for three or four months a year. The gardening had to stop.  The gardens are now thriving and life is better as good food, water and an income are available all year round. ”

And a reminder that all donations received by Myra’s Wells are used 100% for well projects. Nothing is deducted for expenses or adminstration. These costs are paid by trustees.