The well at Wakkil Alla School

What a difference a well from Myra’s Wells has made! In April 2015, Myra’s Wells helped to drill a well just 1km from Wakkil Alla School in Gorom-Gorom. This a very arid region in the north of the country. The water supply has been good.

With help from Myra’s Wells,  the charity that looks after the school has now built a water tower next to the well. 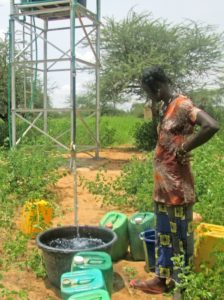 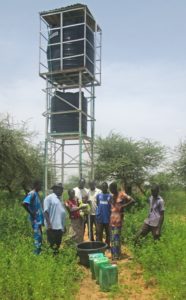 There is a tap next to the tower that is used by the local community. There is then a pipe to the school where there are two more taps, one for the teachers and one for the pupils. Our friend Keith Smith has sent us this report:

The difference for the school is that finally, after 8 years, there will be a regular supply of water for the school. This means that teachers and children can drink and wash, and the kitchen staff can cook. When I was there a year or two ago, the head was discouraged because the children hadn’t eaten that day.  There was no water to cook with. Obviously, a good meal and clean water supply are not only essential for the health of the children, but also enables them to study.

The difference for the local community is also significant. Many people have bought land and built houses in that area, but have not moved out there because of the lack of water. This will help people live!

In addition, the school has a great testimony in the area, because of the quality of the education. And the lives of the teachers. The well will re-inforce that. It will show that the Christian presence, in the middle of this Muslim town, as an influence for good. Relationships between Muslims and Christians are good and getting better. Muslims who wouldn’t put their children into school now are lining up to do so. Some are even coming along to church. All this also undermines the desperation and prejudice of people upon which extremist groups such as al-Qaeda and IS feed. So in a very real way, the school and water tower are part of the fight against terror.