About 2 years ago, Myra’s Wells heard about a village in the Kaya area of Burkina Faso. It is not a large village – about 500 people – but the people had desperate need of clean water. This is the story of clean water at last in the village of Sigr Bila.

The situation at the village 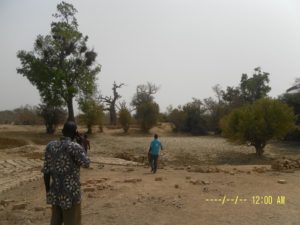 500 people is not huge. But imagine a village of this size in UK without access to clean water! The nearest pump was 2km away, but that frequently broke down. The next nearest pump was 6km away. The surveyor we sent to see the village told us about the pastor’s wife going to fetch water. She left at midday and arrived back in the evening. He described it at the most needy of the 5 villages he went to see at that time.

So, many of the people just went to the nearby river and pond. Here, they shared the water with the livestock and local wildlife.

It didn’t take us long to decide that this would be a good place to drill.

In June 2017, Christine arranged for a drilling contractor to go and drill a borehole. This is later than we would normally drill as the rainy season is just starting. Unfortunately, the drilling rig which was going to be sent was damaged on its previous contract, so it was delayed. A couple of days later, the drilling team set off. They got to within 5km of the village but it had started to rain. There was a real risk that the heavy lorries could get stuck in the mud. They rang Christine to say they would have to wait to see if it dried up enough to continue. The men from the village came and helped to put rocks and stones on the “road” (it is just a track on the compacted soil) to try to make it more passable.

2 days later, Christine heard that they had arrived in the village. But there was bad news. Although the drill was now in Sigr Bila and set up, they had failed to find water in the first location. They had tried a second location. The borehole was 80 metres deep, but, again, there was no sign of water. They called Christine and asked her what they should do. Christine got in touch with us by email and we said we would like to try for the third and final time. We hoped that there would be clean water at last in the village.

This time, the drilling went down to 110 metres. That is deeper than we would normally go. But, even so, there was still no water. We were very sad to have to leave without providing a well. But the attitude of the people was so wonderful. They thanked everyone for trying …

We always had in our minds that we would like to try again there. Normally, 3 is the most times we feel we can try. But the people there were so grateful to us for trying. Then, in November 2017, Christine had a visit from 2 people who had been sent from the village to give her a gift, just for trying. It made us even more determined to go back and try again, if we could. People in Burkina Faso are so grateful for what we are trying to do for them.

It is now a year later. On 30th November 2018, Christine sent us an email. There was a chance to try again. We asked some of our supporters to pray for success over the weekend of 1st/2nd December.

On 3rd December, we heard from Christine. The drilling company had decided to go to two places in the north first of all – and one of those places now has a new well. But the plan was to go back to Sigr Bila the next Wednesday. We continued to pray about it.

Wednesday came and went and we heard nothing. We were thinking that there had been another failure, but kept praying. Then on Thursday 6th December, at about 5pm, we had the email we had been really praying for. Clean water at last in Sigr Bila.

Clean water at last – the details

Amazingly, the drilling found water at only 56 metres deep! Considering the three previous boreholes had been up to 110 metres, this was incredible. It is a difficult area to find water. We just give praise to God for the wonderful provision of clean water at last for these lovely people who were just thankful to us for trying in the past. The flow rate is 1000 litres/hour – very adequate for their needs.

There is much happiness in the village. We pray that the provision of physical water will lead them to the water of life. And we will ask them to be sure to thank God for their own clean water at last. That will be part of the Well Blessing service that will be arranged in the near future.

We hope to have pictures of the new well soon.