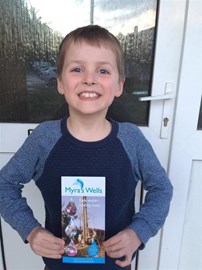 Awesome Adam is just 8 years old. He has decided to challenge himself to walk 26 km (16 miles) along the Castleman Trailway in Dorset to raise money for Myra’s Wells. Here is the story. If you agree with us that this is a big challenge, you may like to sponsor him using this link. 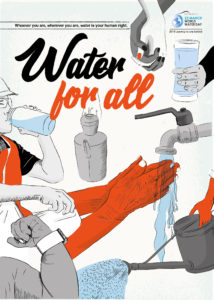 The UN has designated 22nd March each year as “World Water Day”. It is an opportunity for organisations, including charities, to raise awareness of the huge need that still exists for clean water in many parts of the country.

Myra’s Wells has organised an event in conjunction with some local schools in Dorset. To support this, Eddie has visited a number of schools to talk about how much difference clean water makes to people in Burkina Faso.

Eddie visited Adam’s school assembly. Adam listened very carefully and afterwards, he had a lot of questions that he asked at home. What he learned was that many people, especially children, suffer with illness simply because they only have dirty water to drink. Sometimes, they have to walk a long way to fetch the water. Often, children cannot go to school because they have to go to fetch the water.

Adam wanted to do something about it. So, the family talked about it and the idea was born. Why not do a long sponsored walk?

In Dorset, there is a route called the “Castleman Trailway”. Some of it follows some of a disused railway line from Southampton to Dorcester. This is what the “Dorset for you” web site says about it:

“Castleman Trailway offers a beautiful and practical route to take you where you want to go. As you travel along the trail you will pass some of the county’s internationally important heathland, cross rivers and pass through forestry plantations.”

The trailway starts at Upton Country Park outside Poole and goes to Ringwood. The plan is to walk this route on 30th March 2019.

How long is it? 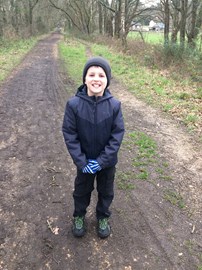 26 kilometres! If you remember pounds, shillings and pence, that is 16 miles. It’s a long way for anyone! Adam is just 8 years old! He is training hard for this – here he is after walking a 4 mile section last weekend. It is good to see he is still smiling!

We are so grateful to him.

No wonder he is “Awesome Adam”. His parents and his school are so proud of him. We say “Thank you” to a very kind thoughtful young man who wants to help people he has never met, in a place he has never been too. This is a link to his JustGiving page. You might like to give him some encouragement!

Myra’s Wells is a Christian charity drilling wells in Burkina Faso, one of the world’s poorest counties. We provide wells in communities where we learn of the need, irrespective of ethnic or religious background. Since starting this work in 2006, 148 wells have been drilled. Please take a look a the rest of our web site.