Here is why wells are needed so much in Burkina Faso

Here is why wells are needed so much in Burkina Faso! The village of Silmiougou is near a larger village called Bassinsa in the province of Ganzourgou. About a thousand people live here. Despite being only about 50 or 60 miles from the capital Ouagadougou, the people here still had no clean water near to them. This is typical of so many villages in Burkina Faso. It can mean a round trip of 5km, 6km, 7km or more, by foot, to fetch water.

Last November, Myra’s Wells drilled a new well there – one of ten that were completed before Christmas.

The drilling was successful after one attempt. That does not always happen, but our drilling contracts allow for up to three attempts. That first attempt located a sustainable source of water at a depth of 78 metres. The flow is 1700 litres per hour. The well is deep enough to be able to provide water all year round even when the water table level drops through the dry season.

So three months on ..

Here is the well in use. 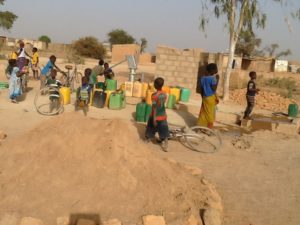 Notice the number of containers waiting to be filled. No prizes for counting them. But you get a very clear idea of just how much the well was needed. There is a constant stream of people coming to use it. So much so that there are still people coming at 7pm. 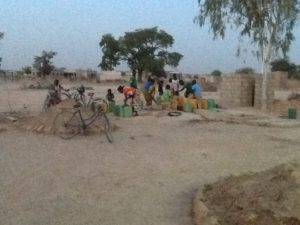 The light was failing, so the picture is not very clear. But the number of containers doesn’t look to be many less.

Which just illustrates why even more wells are needed.

Remember that 100% of all donations to Myra’s Wells will be used to drill wells. Trustees pay for all other expenses.